At some days, it is particularly hard work to get good data. Today was such a day. As the weather was still promising after the morning flight, we decided to have a second flight in the afternoon. Some stratocumulus cloud fields were present, so we cloud people wanted to go for catching some of them.

The plan was to start directly after lunch break, but while sweating in the helicopter, we had to wait for the controller to finish lunchtime as well. Then, after starting the engines, a beep and a red light indicated a problem with one of the two power generators. The heli can fly with only one generator and a battery as backup, but the ACTOS data monitoring had switched to battery mode. Finally, after the usual start procedure “HELIOS airborne – continue climbing – ACTOS airborne” the ground crew noticed, that ACTOS wasn’t pointing into the direction of flight, so we decided to return to the airfield. The ground crew couldn’t find any suspicious failures and ACTOS was flying in a normal way again, so finally we could begin our measurement flight.

As usual, we started to record a vertical profile up to 7000ft, where we already fly inside the free troposphere. We encountered some single cumulus clouds in 700m, then a stratocumulus cloud layer in 1100m with clear skies above. The temperature inversion of 5K was just above the SC clouds with a nearly constant temperature up to our maximum altitude. Here, we flew one 15 minutes leg to gather data in the free troposphere with the aim to compare it to data from mount Pico (last chance today!).

Before every flight, we work out a flight pattern to follow, but being airborne, we constantly have to review and adapt our plan. For that purpose, the ACTOS data monitoring system provides us a camera stream and information about altitude, temperature, liquid water content and particle concentration. Besides those parameters, we have to take into account the limitations from the pilot’s point of view like minimum flight speed and the 10nm sector around the airport. Due to running on battery, we encountered some interruptions in the data monitoring. Therefore, at some points the only way to find out if ACTOS is inside the cloud was to open the door and have a look outside. You see, the workload is quite high anyways for both the pilots and the scientists, and the issues demand all your concentration.
. 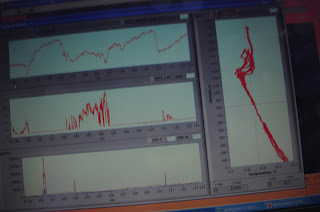 ACTOS data monitoring and the helicopter instruments help us

We descended until ACTOS was flying inside the SC clouds and tried to measure there. But the SC field was thinning out, with an maximum LWC of just 0.3 g/m3 and cloud holes getting bigger. We decided to leave our East-West flight pattern and veer to the north, where we spotted a promising SC cloud field. Flying against the wind, it felt like hours to reach the clouds, but we arrived there just inside the 10nm zone. This decision turned out to be a good one, we found a fascinating SC cloud with a highly dynamical and inhomogeneous cloud top, LWC up to 1 g/m3 and a vertical extend of about 130m. We spent 15 minutes measuring inside and at the cloud tops and finished with some porpoise dives from cloud base up to the free troposphere. Here, we discovered another interesting feature: just above the inversion layer, particle concentration showed a peak. Before we ran out of fuel, our cloud field also started to decay and we returned happily to the airfield.

We are very confident about this flight. Despite all the issues, we could complete our plan and record some valuable data.

posted by Ulrike
pictures by Holger 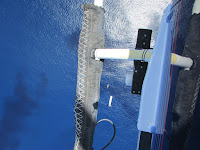 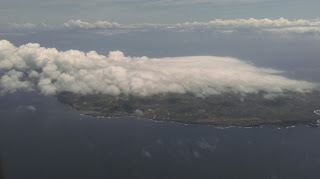 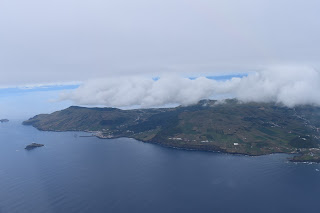 Today (Sunday June 16) morning was my turn. Birgit invited me to fly with her. Conditions were excellent: high stratocumulus with some holes, almost no wind, no conflict with other aircrafts. Our Romeo-Oscar took off at 09:50 and climbed west of the island to make a sounding. I doubt, whether many Graciosa inhabitants had ever a chance to see the whole island from above. We had :).

On the way up, several interesting things happened. First, we could not notice aerosol in the boundary layer. Second, we passed through a thin stratocumulus deck capped with a weak 1 K inversion and again were in absolutely clean air. However, at ~1600 m and up we reached a second, much stronger (4 K) inversion and haze. The situation was reverse to normal: clear boundary layer and dirty free troposphere! What a chance to get unusual data!
We felt a strong push to do the best: collect as much information as possible to understand this ph…
Mehr anzeigen